At least 8 years have passed since she was rescued, but she still remembers her rescuers.
This mother known as Yatta is a 20-year-old elephant who couldn’t wait to show her little baby to the people who are the most important to her, her guardians at the David Sheldrick Wildlife Trust (DSWT) in Kenya.

About 8 years ago Yatta was released into the wild, but curiously she returned to the sanctuary with her little newborn calf, which she wanted to introduce to the people who cared for her when she was orphaned.

Yatta arrived at the sanctuary at only 9 months of age, had been orphaned and would be raised by humans along with other elephants in the same situation.

The images of the meeting between Yatta and her keepers were recorded and it is clearly seen how she presents her little baby. The rescuers named her Yoyo, and her first-born Yetu.

“She is a proud mother,” the caregivers commented about Yatta. “It is an absolute show of trust and affection, she brought her new baby to meet the people who saved her.” – Sanctuary caretakers in Kenya.

“We not only saved an orphaned baby and raised her, but she also successfully returned to the wild and started her own family,” said Rob Brandford. “For elephants, family is everything , so it is not surprising that they choose to share their new family member with their former human caretakers, because they are part of their family.” – Rob Brandford

It was wonderful for the Sanctuary Keepers to see Yatta again , and they were glad that he chose them to celebrate the arrival of his second calf, and there were several births that day of orphaned elephants that grew up with Yatta. 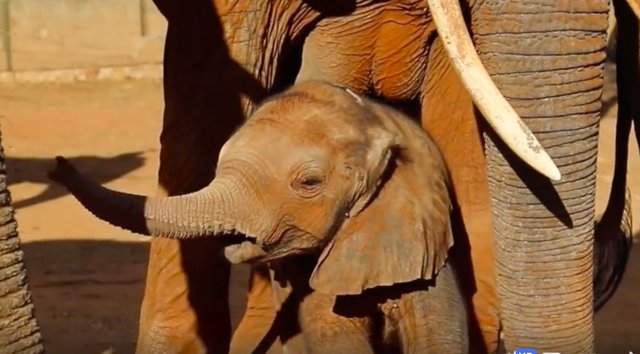 This news has high hopes for the organization and the world as DSWT rescues hundreds of orphaned and abused elephants a year, the unfortunate thing is that in most cases it is caused by humans.

It is clear that the greatest satisfaction for these rescuers is seeing how new generations are born in wild herds, increasing the number of elephants.