HomeTrendingWoman Shares a Thank You Note to a Stranger Who Saved Her...
Trending

Humans living in today’s world act worse than animals. We tend to see no kindness, no humanity, and definitely no empathy towards other human beings. The world we now live in has become a world of prey. In today’s world, women face many dangers, and it is most commonly because of men. However, there are some men out there who still treat women with dignity and respect. The story we are about to share with you proves it.

So recently, a survey was conducted on women, and 61% of them were keen on taking precautions to stay safe in public, and around 50% were utterly scared to walk home at night, alone. However, this being said, there are times that we are not alone as we may think. There are times when we can receive help from total strangers at unexpected moments.

One Reedit user shares her experience with her followers about the kindness of a total stranger who saved her from a subway stalker. The alleged stalker had been following her and calling her baby, and even waiting behind her for about 6 minutes, and trying to make inappropriate advances. He had followed onto the train and placed himself behind her. This made her extremely scared and anxious.

Being able to take it any longer, she mixed with the crowd on the train, hoping and praying that her stalker would leave her alone. However, this did not happen. But what happened next was a true miracle. A total stranger standing close to her just asked “Hey Lauren. You going to Jeff’s dinner party too?” Being utterly shocked by this man who just talked to her, apparently as if he knew her because truth be told her name was not Lauren, and she most definitely had no idea who Jeff was.

However, she came to her senses and realized what was happening. So she played along with him, and shortly after, he suggests that they go to the party together. So as they were going to the ‘party’ together, they got off at the same station. This human’s kindness did not end there. This angel from heaven pretended he got a text and shows it to the damsel in distress. He asks her via text message whether she is in any kind of danger. She went on to share with him secretly that she was being followed, so, to protect her, he escorted her to her friends’ place. However, he was supposed to get off at a totally different station. The stalker, seeing the woman with another man who she called her ‘guardian angel’ just left her be.

Other women on Reddit have come up with some clever strategies for keeping you safe on the streets. 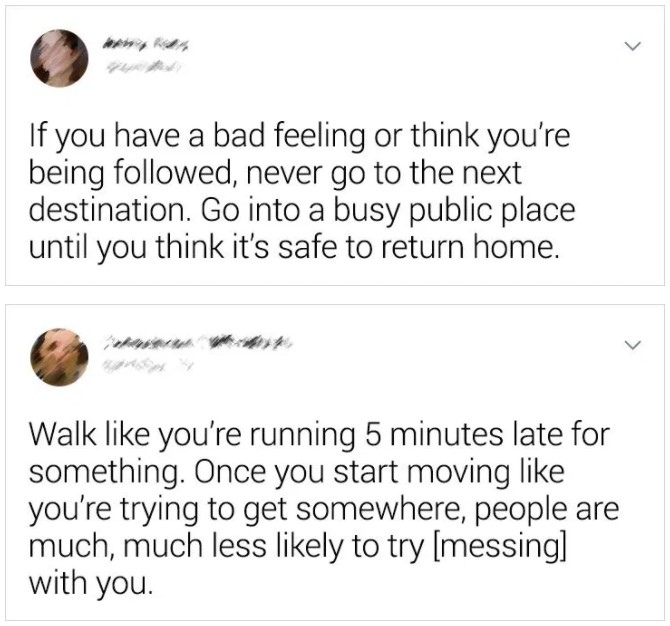